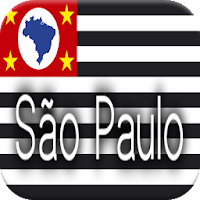 History of São Paulo state This app was developed by HistoryofTheWorld, last update on Apr 27, 2019, it has been downloaded more than 100

Mobile
São Paulo (Portuguese pronunciation: [sɐ̃w̃ ˈpawlu] (About this soundlisten)) is one of the 26 states of the Federative Republic of Brazil and is named after Saint Paul of Tarsus. As the richest Brazilian state and a major industrial complex, often dubbed the "locomotive of Brazil",[4] the state is responsible for 33.9%[5] of the Brazilian GDP. São Paulo also has the second highest Human Development Index (HDI) and GDP per capita, the fourth lowest infant mortality rate, the third highest life expectancy, and the third lowest rate of illiteracy among the federative units of Brazil, being by far, the safest state in the country.[6][7] The homicide rate is 3.8 per 100 thousand as of 2018,[8] almost 1/4 of the Brazilian rate. São Paulo alone is richer than Argentina, Uruguay, Paraguay and Bolivia combined.[9] If São Paulo were an independent country, its nominal GDP would be ranked among the top 20 in the world (2010 estimate).[10] The economy of São Paulo State is the most developed in Brazil.[11]

With more than 45 million inhabitants in 2017, São Paulo is the most populous Brazilian state, the most populous national subdivision in the Americas,[1] and the third most populous political unit of South America, surpassed only by the rest of the Brazilian Federation and Colombia. The local population is one of the most diverse in the country and descended mostly from Italians, who began immigrating to the country in the late 19th century;[12] of the Portuguese, who colonized Brazil and installed the first European settlements in the region; indigenous peoples, a large number of distinct ethnic groups; Africans, who were brought from Africa as slaves in the colonial era and migrants from other regions of the country. In addition, Arabs, Germans, Spanish, Japanese, Chinese, and Greeks also are present in the ethnic composition of the local population.

The area that today corresponds to the state territory was already inhabited by indigenous peoples from approximately 12,000 BC. In the early 16th century, the coast of the region was visited by Portuguese and Spanish explorers and navigators. In 1532 Martim Afonso de Sousa would establish the first Portuguese permanent settlement in the Americas[13]—the village of São Vicente, in the Baixada Santista. In the 17th century, the paulistas bandeirantes intensified the exploration of the interior of the colony, which eventually expanded the territorial domain of Portugal and the Portuguese Empire in South America. In the 18th century, after the establishment of the Province of São Paulo, the region began to gain political weight. After independence in 1820, São Paulo began to become a major agricultural producer (mainly coffee) in the newly constituted Empire of Brazil, which ultimately created a rich regional rural oligarchy, which would switch on the command of the Brazilian government with Minas Gerais's elites during the early republican period in the 1880s. Under the Vargas Era, the state was one of the first to initiate a process of industrialization and its population became one of the most urban of the federation.

The city of São Paulo, the homonymous state capital, is ranked as the world's 12th largest city and its metropolitan area, with 20 million inhabitants,[1] is the 9th largest in the world and second in the Americas, after Greater Mexico City. Regions near the city of São Paulo are also metropolitan areas, such as Campinas, Santos, Sorocaba and São José dos Campos. The total population of these areas coupled with the state capital—the so-called "Expanded Metropolitan Complex of São Paulo"—exceeds 30 million inhabitants, i.e. approximately 75 percent of the population of São Paulo statewide, the first macro-metropolis in the southern hemisphere, joining 65 municipalities that together are home to 12 percent of the Brazilian population.
Show More Show Less
ADS
More Information about: History of São Paulo state

Compatibility:
Android 4.0.3 and up